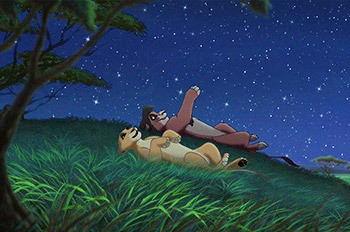 Even lions can admire balls of gas burning billions of miles away.
Advertisement:

When some characters are having a peaceful night together, there's a good chance they will take a moment to admire the stars. They may try and Make a Wish (often with a shooting star), or point out constellations, or ponder the cosmic significance of human life, or even speculate about what's out there in space. Sometimes this leads to a romantic moment with the peaceful atmosphere, but the characters involved can be friends or family and the scene can still work. The moment could even feature a single character, which often gives the scene a much lonelier feeling.

It's always quiet and calm, sometimes even introspective, and allows for a nice moment of character interaction if there are multiple characters. If there's drama involved, it's almost always a moment of internal conflict, and even comedic moments tend to be innocent and light-hearted. In this way, it might be an Action Film, Quiet Drama Scene, especially when the moment comes as a break from more intense or active scenes. There can also be a bit of Foreshadowing if one of the "stars" turns out to be an alien ship or the like. In a romantic scene, this trope may lead to Girls Stare at Scenery, Boys Stare at Girls.

Some equivalent scenes at other times a day are cloud watching and Watching the Sunset. Compare Campfire Character Exploration.