Film / A Walk to Remember 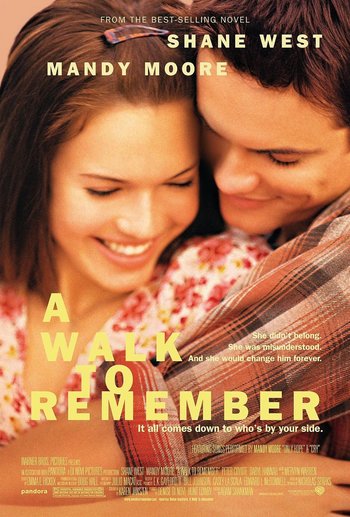 Someday we'll know, if love can move a mountain...
Advertisement:

A Walk to Remember is a 2002 romantic drama tragedy about a bad boy and a sweet Christian girl who fall in love and are torn apart when one of them gets leukemia. Everything you can expect from Nicholas Sparks, who wrote the 1999 novel from which the film was adapted.

Also notable for being the breakout acting role of teen pop princess Mandy Moore, who also contributed to the soundtrack. Also notable are the songs from Christian Rock Band Switchfoot, which was hugely instrumental for bringing the band mainstream success. Also in the cast are Shane West, Peter Coyote, Lauren German, and Daryl Hannah.

Alternative Title(s): A Walk To Remember