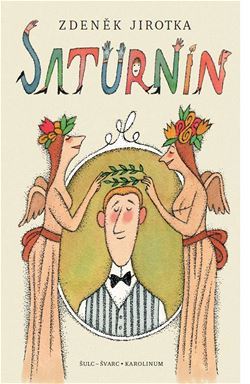 Saturnin put in an appearance and made a report to grandfather. He said everything was in order, the news-stand had been transported back to its original place and the car brought to a repair service. He said that the mechanic, however, insisted on receiving a photo so he could see what the car had looked like before. He had also asked whether one door had not remained behind in the garage. Saturnin had looked through the garage, but had not found the door. He would make inquiries as to whether it had not stayed behind in the news-stand.
Advertisement:
The Narrator, describing the aftermath of one of the many exciting events incited by Saturnin

A humorist book by Czech writer Zdeněk Jirotka, published in 1942. Its titular character is a resourceful manservant with a hidden sense of adventure and a penchant for creating and subsequently solving tricky situations. Said to be inspired by Jeeves and Wooster, the book is nonetheless its own thing and its characters have become archetypes in their own right in Czech popular culture. It is known for its subtle humour and hilariously absurd yet believable situations. In 2009, it was elected the most beloved book in the Czech Republic in a public poll run by the Czech TV note winning over such luminaries as Babička by Božena Němcová, The Good Soldier Švejk, as well as The Lord of the Rings, Harry Potter and Twilight.

Also turned into a TV mini-series, which had been cut down to create a film.