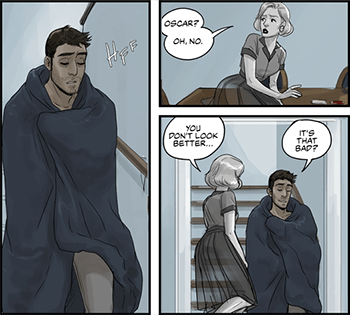 Narrator: "Today, he had to stay inside, because he had caught a cold and was under the weather."
Crawford: "Actually, right now I'm under this little blanket."
— Crawford's Corner, "Crawford is a Sneezer Pleaser"
Advertisement:

Picture this: you're a cartoonist, and someone asks you to draw a sick person. Do you draw them wrapped up in a blanket? Well, that's what this trope is about.

There is a bit of Truth in Television to this: in the early stages of a fever (i.e. while the body's raising its temperature but hasn't yet reached its peak), homeostatic systems across the body determine that it's colder than it needs to be, which brings the illusion of being cold. There's also a false but persistent bit of "conventional wisdom" that states that the best way to treat a fever is to "sweat it out" with blankets. Additionally, many illnesses make the sufferer feel tired to the point of needing to sleep wrapped up in a blanket; pneumonia is one such example, with electric blankets typically being used in tandem with humidifiers to keep the afflicted individual comfortable.

While the Ill Girl may usually be seen in bed, sometimes they may be seen swaddled in a blanket.

This does not include instances where the sick person is in bed, as if you're in bed, you're likely to be wrapped up in a blanket anyway unless the weather is really hot.

Surprisingly, no relation to smallpox blankets, which would be more aptly called an illing blanket.