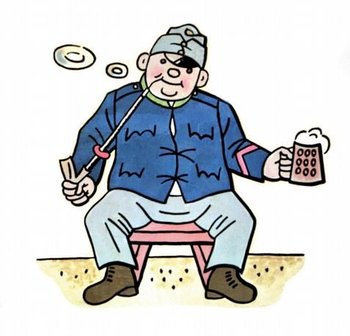 An illustration of Švejk, by Josef Lada.
The Good Soldier Švejk is an unfinished satirical anti-war novel by the Czech author and political activist Jaroslav Hašek. Originally named Osudy dobrého vojáka Švejka za světové válkynote Adventures of the Good Soldier Švejk in the World War it, naturally, tells us about the adventures of the titular soldier in World War I. Such dry description, however, couldn't even try to approach the irreverent hilarity of the book, that from its very first lines sets to lampoon, satirize and hang to dry just about everything Hašek finds objectionable in the Two-Headed Monarchy and its military. Unfortunately, due to Hašek dying in 1923 from tuberculosis, the novel got only about half-finished, with Hašek completing just three parts out of intended six. The publisher insisted on the rest being completed by his friend Karel Vaněk, though it ended up not as good and is rarely republished today, unike the original portion of the novel, which is the most translated book in the whole of Czech literature.
Advertisement:

The novel revolves around the titular soldier, a born and bred Pražák Josef Švejk, about whom even the author cannot seem to decide, whether he is out to subvert all the idiocy around him through Obfuscating Stupidity, his blue-collar wits and common sense, and dumb insolence; or he's indeed just as stupid as almost everyone around him seems to think. You see, the novel being set in a vast, archaic and crumbling Hapsburg Empire, where the Czechs like him (and the author) were considered Second Class Citizens at best, and which, like so many crumbling empires before, tried to prop itself by an extensive and intricate bureaucratic scaffolding, this produced a lot of glaring, visible idiocy around for everyone to see, and a lot of cynical, snarky people just trying to get by through it. Now, take everything said above, and try to put it into a military setting — and you'll see why Joseph Heller once said that had he not read the novel before, he'd never write Catch-22.

This book provide examples of the following tropes: