Literature / The Gospel of the Flying Spaghetti Monster 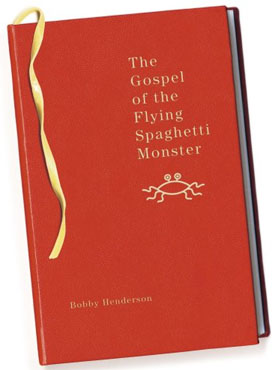 Within these hallowed pages, we learn the sacred truths about how global warming is caused by a decline in pirate population and how people growing taller is a side effect of overpopulation. The later link is caused by the fact that gravity is a spiritual force. The secular "theory of gravity" is "just a theory", and these "Newtonists" should not be allowed to monopolize the physics hours in school. In reality, gravity is caused by FSM gently pushing everyone down with His noodly appendages. There are more people now than in the stone ages, and thus there is less gravity left for each individual human. That's why we grow taller now.