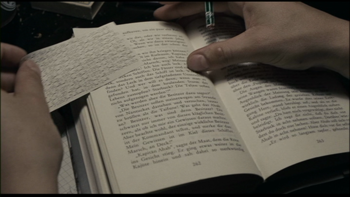 This is an old and basic cipher.

John Doe has a copy of a book. Richard Roe has an identical copy of the same book, which he can use to decipher John's coded messages and code his own replies. The messages are written out in groups of numbers. Either the first number is a page, the second number a line on the page, and the third number a word inside that line, or it can also be just the page number and word number, if you want to make it easy. The Ottendorf Cipher is a specific variant that uses Page, Word, and then the letter inside that word, which lets you encode words that aren't found within the text - like, say, the address of a meeting place.

Big and well-known books make better sources as you have more words to choose from (thus The Bible is often the source), and no one will react if you're walking around with a pocket version of The Da Vinci Code. Relatedly, if you are unfortunate enough to lose your copy, a well-known book will be easier to replace without raising eyebrows, though some books are slightly different from edition to edition, so you need to make certain to get the right one (This also applies to the Bible, as the New Testament is an English translation of a collection of Latin and Latin-translated Greek documents, and the Old Testament is an English translation of a Latin translation of a collection of Hebrew documents. Better make certain you specify which version you want, as exact word choice can vary considerably between versions even if the general meaning of any given verse stays roughly the same). If you're walking around with an 1824 edition of a book, or asking specifically to buy a copy of the fourth printing of the second edition of something... people may well get suspicious (especially the detective who's after you). Of course, using a widely available book also makes it easier for other people to read your messages, should they be intercepted, and while the book itself may be utterly innocuous, sending a letter that is merely a long list of numbers is an unmistakeable indication that you are communicating in code.

In some video games, solving such a code using an external manual is part of its Copy Protection.