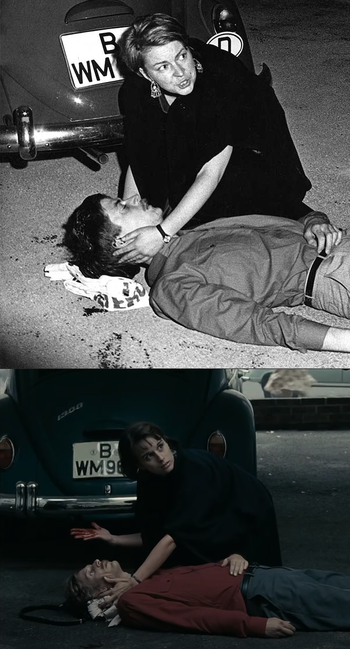 from June 2nd, 1967. Below: Recreation in The Baader Meinhof Complex, 2008.
A popular way for creators to sell the audience on the authenticity and pinpoint accuracy of their Docudrama, Dramatisation or any other work Based on a True Story (even if just loosely) is to try and painstakingly re-stage famous moments that were caught on film in Real Life.
Advertisement:

To achieve that, the scene would be shot on location or on meticulously recreated sets, utilising period-accurate props, actors and extras of uncannily similar builds as their historical characters, and even the same camera angles (or, just for novelty, completely new angles). Liberal (though suitably camouflaged) use of CGI and other special effects is not unheard of.

Needless to say, this can be quite a daunting task, since the maker essentially invites direct comparisons of his work to the real deal. If done well, such recreations can actually pass for legitimate pieces of historical footage themselves (and cause no shortage of confusion). If done poorly, it could just as easily serve to expose the maker's failure to pay enough attention to the minute details of their supposedly faithful re-telling.

It should be noted that the shot in question can end up being re-contextualised to the heart's content of the makers since it's the visual accuracy that counts first and foremost, not necessarily the details surrounding the footage or the event itself.

This trope can also apply In-Universe, although Stylistic Suck is certain to abound in the best of cases.

Contrast with the Homage Shot, which takes deliberate inspiration from a different piece of footage but doesn't strive to imitate it in any photorealistic manner. Also contrast with Art Imitates Art, if the source is explicitly as fictional as the recreation.

Not to be confused with Crime Reconstruction, which involves recreating an event that there isn't real footage of.