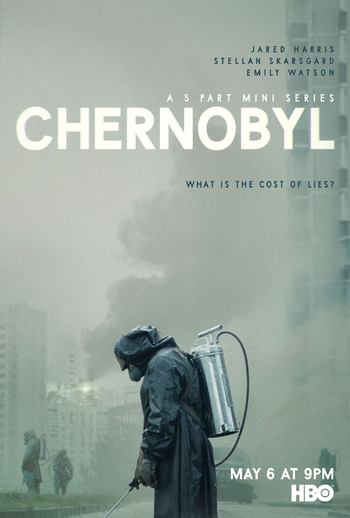 "Vnimanie, vnimanie..."
"What does matter is that, to them, justice was served. Because, you see, to them, a just world is a sane world. There was nothing sane about Chernobyl."
— Valery Legasov, "1:23:45"
Advertisement:

Chernobyl is a 2019 miniseries chronicling the aftermath of the infamous nuclear accident. It is the first co-production between HBO and Sky, created and written by Craig Mazin and directed by Johan Renck. The soundtrack is the work of Hildur Guðnadóttir.

At 01:23:45 on April 26, 1986, Reactor #4 at the Chernobyl Nuclear Power Station explodes. It soon becomes clear to personnel on the ground that a catastrophic failure of the reactor vessel has blown up the whole building it's in, and is sending a cloud of radiation all over Eastern Europe. Soviet authorities race to contain the disaster — or at least some of them do, while others are more interested in denial and cover-ups.

Jared Harris stars as Valery Legasov, a nuclear physicist called in to give advice on the unfolding disaster. Stellan Skarsgård is Boris Shcherbina, a Soviet apparatchik who works with Legasov. Emily Watson is Ulana Khomyuk, another physicist who is the first person to see just how dire the situation is. David Dencik portrays Soviet Union leader Mikhail Gorbachev.

Many details in the series, particularly the subplot following fireman Vasily Ignatenko and his wife Lyudmilla, were based on accounts in the oral history Voices from Chernobyl. Compare Chernobyl: Abyss, a Russian feature film focusing on a heroic firefighter turned liquidator.

The official trailer can be watched here.

Individual character tropes go on the character sheets, and tropes applying to specific episodes can be found on the Recap pages.
Advertisement:

open/close all folders
A-G
H-R
S-Y
"To be a scientist is to be naive. We are so focused on our search for truth, we fail to consider how few actually want us to find it. But it is always there. Whether we see it or not, whether we choose to or not. The truth doesn't care about our needs or wants, it doesn't care about our governments, our ideologies, our religions. It will lie in wait for all time. And this, at last, is the gift of Chernobyl. Where I once would fear the cost of truth, now I only ask: what is the cost of lies?"
Feedback

90 seconds on the roof

During the Chernobyl disaster, 3,828 "bio-robots" were tasked with clearing the roof of graphite chunks originating from the exploded core. The intense radiation gave them only 90 seconds to work before exposure to a lethal dose.

90 seconds on the roof

During the Chernobyl disaster, 3,828 "bio-robots" were tasked with clearing the roof of graphite chunks originating from the exploded core. The intense radiation gave them only 90 seconds to work before exposure to a lethal dose.