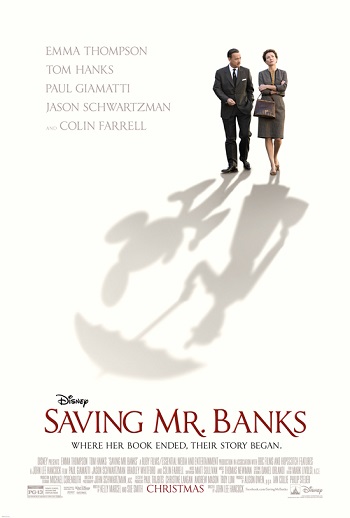 Saving Mr. Banks is a period drama movie directed by John Lee Hancock and based on the true story of the production of the 1964 Disney classic Mary Poppins. Emma Thompson stars as P.L. Travers, author of the original Mary Poppins novels, who after much resistance, finally travels to Hollywood to serve as a consultant on the adaptation of the movie. There she meets Walt Disney (Tom Hanks) and his staff of writers and musicians who are hard at work adapting her story to the screen. However, having been given unprecedented creative control in return for the film rights, Travers shows herself to be a tough person to work with considering her demands range from reasonable, to the ridiculously obstructive.

Intercut with this is the story of Travers' childhood in Australia, particularly focused on her relationship with her father (Colin Farrell), a banker who is filled with energy and happiness, but whose health and career are at constant risk due to his alcoholism. As the two stories play out, it is eventually revealed why Travers is so protective of her story, and Disney realizes what he has to do to make the movie work.