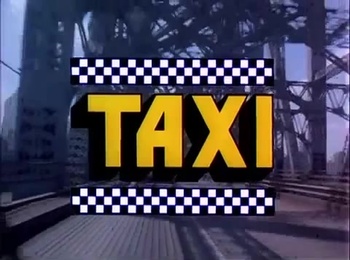 Elaine Nardo: I'm only going to be working here part-time... I'm not really a taxi driver.
Alex Reiger: I understand. You see that guy over there? He's an actor. The guy on the phone, he's a prize fighter. This lady over here, she's a beautician. The man behind her, he's a writer. Me? I'm a cab driver. I'm the only cab driver in this place.
— Pilot episode
Advertisement:

This seminal Work Com co-created by James L. Brooks, which ran for four seasons on ABC (1978–82) and one on NBC (1982–83), was set in the grungy headquarters of the New York City-based Sunshine Cab Company.

Extremely well-acted and written, the show remains a high point in American sitcom history. As listed below, if you want to see just about any standard sitcom Trope done right, this is the place to come.

The series has now a character and a recap sheet under construction.