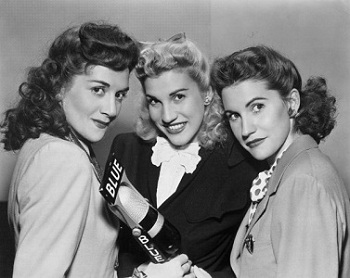 From left to right: LaVerne, Patty, and Maxene.
Advertisement:

The Andrews Sisters were a big band singing trio from the late 1930s through the early 1950s, although their biggest years were undeniably during World War II.

They became one of the most popular female close harmony groups of the first half of the 20th century and released a number of famous tunes that have ended up in a number of video games and movies. They inspired many artists after them, and are possibly the Trope Makers for Blonde, Brunette, Redhead.

The trio performed together from 1925, when they were children, until Maxene's death in 1967. Patty and LaVern continued with a replacement, Joyce DeYoung for a time, but dissolved The Andrew Sisters act in 1968. The two embarked on solo careers, mostly on the oldies circuit, and reunited only for the 1973 Broadway revue Over Here!.

Many mp3 websites fail to differentiate them from the Fontane Sisters or the McGuire Sisters. They're also sometimes mistaken for the Boswell Sisters, an earlier Jazz trio with some very strong stylistic similarities — the Andrews started their career as imitators of the Boswells so it might explain a lot.