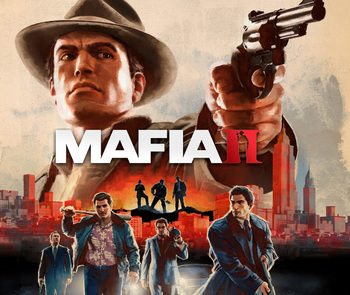 How lucky can one guy be?
Advertisement:

Mafia II is an action-adventure game and sequel to Mafia: The City of Lost Heaven, developed by 2K Czech. It was released on August 24, 2010.

During World War II, Vito Scaletta, a young poverty-stricken resident of Empire Bay (a Fictional Counterpart of New York City, with elements from San Francisco), is caught committing robbery and he chooses serving in the army during their invasion of Europe instead of going to jail. Vito is however wounded in service, and is sent home to Empire Bay for a month - but upon his arrival, he discovers that things have taken a turn for the worse. His father has died and has left his family with a massive debt of $2000... money which the local loan shark is getting quite anxious to get back.

While Vito has been gone, his friend, the small-time criminal Joe Barbaro, has been busy getting connections within the local Clemente crime family. He is able to use them to get Vito some forged discharge documents and a foot in the mob's door, offering Vito a chance to pay off the family debt.

An Alternate Universe DLC pair of expansions called Mafia II: The Betrayal of Jimmy and Jimmy's Vendetta were released on PS3 before all consoles also exists.