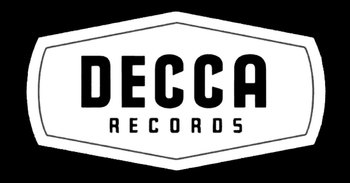 Decca Records is a British record label, founded in 1929 by Edward Lewis. After buying out several failing labels in the 1930s, the company found considerable success with names like Bing Crosby, Louis Armstrong, and Al Jolson, with an American branch soon established in 1934. British Decca was known as a pioneer in developing new sound recording methods, while American Decca was known for its many film soundtrack releases in the 1940s and 1950s.

With World War II on the horizon, Lewis sold off the American branch of Decca. The two companies operated separately for the next decade or so; the UK branch marketed its records in North America as London Records, while distributing US Decca's output in Europe on the Brunswick label. This was similar to the relationship between EMI and Capitol Records, and Philips Records and Mercury Records.

In 1962, the British branch infamously turned down a young, up-and-coming band known as The Beatles. They did, however, eventually sign on what would become another one of the world's greats, The Rolling Stones. Ironically, the American branch did issue the "My Bonnie" single by Tony Sheridan and the Beat Brothers (a.k.a. the Beatles) the same year, making it the first Beatles release in the U.S.; it sold poorly and the few copies that survived are now true collector's items worth thousands of dollars.

The American branch of Decca bought controlling interest in Universal Pictures in 1952, before being merged with MCA Records in 1962. The British branch was purchased by PolyGram in 1980, which was in turn purchased by Universal Music Group in 1998, reuniting the two Decca labels for the first time since 1943. Sadly, a huge number of original Decca master tapes owned by UMG and stored at Universal Studios Hollywood were destroyed in a fire in 2008.

Today, both branches of Decca are still owned by UMG, which retains ownership and distribution of the earlier Decca releases (except for the Rolling Stones' catalog, which is owned by Abkco).

Also see Deram Records, a sublabel of UK Decca/US London that evolved into an outlet for Progressive Rock and other "underground" genres of the 60s and 70s.