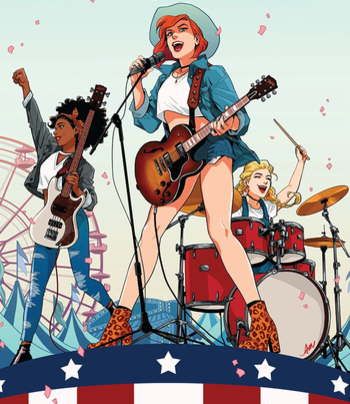 And you thought the Archies were the only real rock band in Riverdale...
Advertisement:

Girl groups are the Distaff Counterpart of Boy Bands. Naturally they'll be a group of attractive young girls who sing and dance in Stripperiffic outfits - usually with songs about sex. Videos will be full of Fanservice and expect at least one member to make it into a lads' mag.

Unlike Boy Bands, there are no set roles for each member of the Girl Group. If there are three members, they'll usually correspond to Beauty, Brains, and Brawn or The Three Faces of Eve. If it's four, then likely the Four-Girl Ensemble. And if it's five, of course the Five-Man Band.

The quintessential Girl Group was The Andrews Sisters way back in the 40s (see below) but the concept of one really exploded in the late 90s. The cause? The Spice Girls.

This British quintet turned into an overnight sensation, achieving worldwide fame and cementing their status in pop culture. Any groups formed in the 90s and 2000s were following their lead. While the boy band craze died down in the early 2000s, girl groups remained around for the rest of the decade. While not as prominent as before, there are still a few.

South Korea has taken this trope Up to Eleven. There are loads of girl bands active, with some of them being insanely popular. This has been going on for a while, with Girls' Generation being most famous in the early 2010's. Now, it's Blackpink and TWICE that are most popular, with Red Velvet, GFRIEND, Mamamoo and A Pink also being quite renowned. Even unknown bands usually have loyal fans, including bands that haven't even debuted yet.

Some ex-girlgroup singers have eclipsed their bands, such as Diana Ross, Beyoncé, Cheryl and Camilla Cabello.

The term "girl group" has also been used to describe rock bands that are composed entirely or mostly of women. Most of these "girl groups" resent this name, due to its connections with pop music and the inherent Double Standard involving rock bands composed of men rarely being called the even more detested label of Boy Band (and then only as an explicit insult).