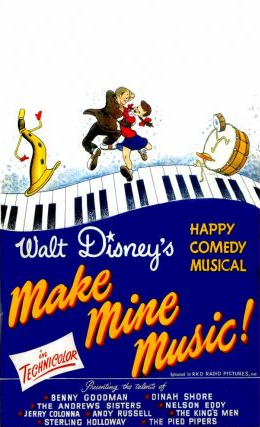 In light of World War II, a large portion of Disney's animators were drafted. In order to keep making movies, Disney had to settle with releasing package films. Make Mine Music is the first of these films (Although Saludos Amigos and The Three Caballeros can be included too, they were a product of the government wanting to make friends with South America, not because of a lack of animators.) Unlike most other Disney animated features from before the age of home video, this was never given a theatrical re-release. Sometimes, however, the individual segments were each tacked onto another Disney release. It is also the last one from Walt Disney's lifetime to be released on home video, and the only one absent from Disney+.note Once Disney+ added Tarzan in June 2020 and Ralph Breaks the Internet in December 2020, Make Mine Music became the only Disney Animated Canon movie, among those released before Disney+'s launch, absent from the service. Although, some clips from the "Blue Bayou" segment appear as part of an episode of Zenimation.

As the name implies, the movie is a music-based Animated Anthology in a similar vein to Fantasia, divided into 10 separate shorts. As with many of the Disney package films of this period, the segments would occasionally be aired separately as part of various Disney anthology TV shows in the 80s and 90s. The shorts that comprise the film consist of the following: