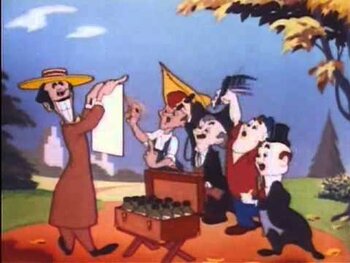 Make Mine Freedom is an American propaganda cartoon released in 1948 by Metro-Goldwyn-Mayer, directed by William Hanna and Joseph Barbera and produced by Fred Quimby. The cartoon concerns four American individuals at odds with each other: a worker, manager, farmer, and politician. Just then, a slick salesman called Doctor Utopia approaches them, offering a tonic called "Ism" that can solve their problems. And all they need to do to get it is to give up their freedoms. A man called John Q. Public tells the four what freedom and free enterprise gave the American people, and shows them what happens when they trade freedom for Ism.

This cartoon gives examples of: