Twilight of the Old West 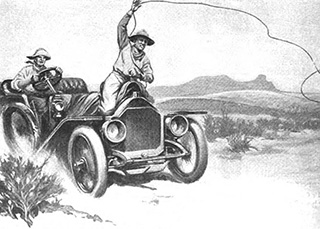 Just off the picture: a wild Ford Mustang.
Our days are [all almost] over
Times have changed around these parts
There ain't no more cowboys
Only men with violent hearts
— Miracle of Sound, "Redemption Blues" and "Setting Sun"* Inspired by Red Dead Redemption and Red Dead Redemption II
Advertisement:

The Twilight of the Old West is a trope invoked by stories depicting the changes that took place in Western North America and Mexico during the closing days of the Wild West and the beginning days of the New Old West. This is roughly the period between 1890 (the year the U.S. Census Bureau announced the closing of the frontier and the Wounded Knee Massacre occurred thereby marking the end of the Indian Wars) and 1920 (which marked the official end of The Mexican Revolution when guerrilla/bandit forces operated along the US/Mexican border and the beginning of Prohibition in the U.S. which closed the last of the saloons).

In stories set during the Twilight of the Old West, there will still be many elements of the Wild West present like cowboys, gunfighters, outlaws, bank and train robberies, saloons, and cattle drives but, as you get deeper into the 20th century, they'll gradually become less common. Injun Country will not be seen at all, as the last spasmodic resistance by Native Americans ended with Geronimo's surrender in 1886 and the aforementioned Wounded Knee Massacre in 1890. Instead, stories involving Native Americans will be set on The Rez. Probably the most noticeable change is the shift away from horses as a mode of transportation in favor of trains and—especially—automobiles. The replacement of gas and oil lights in favor of electricity follows close behind as an indication of progress as do the appearances of new inventions like telephones, motion pictures, phonographs, and airplanes.

While technological changes play a major role, the Twilight of the Old West mainly deals with changes in society and how they affect those who still feel tied to the "old ways" of the Wild West. For example, bringing justice to an area now means criminals are dealt with by sheriffs, police, judges, and jails rather than vigilante justice. Also, Cattle Drives become more infrequent and smaller with the end of the open range and the spread of the railroad system beyond the hub cities that were usually the destination of such drives.

Compare Riding into the Sunset. The Magic Goes Away can be considered the corresponding fantasy trope.

Sub-trope of The Western and End of an Age that overlaps with the latter stage of the Wild West and the beginning of the New Old West. Opposite of Dawn of the Wild West. The East Coast equivalent would be the Progressive Era, encompassing the socioeconomic reforms of Theodore Roosevelt and Woodrow Wilson at the end of The Gilded Age. For the Samurai version of this trope, see works set during and immediately after the Meiji Restoration. Also compare to works set in The Soviet Twenties, which often had this feel out in the Soviet East.

Has nothing to do with cowboy vampire romance or a certain purple unicorn ruling the outback.