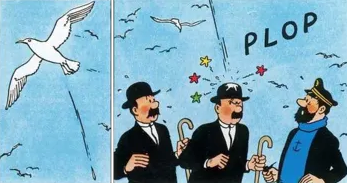 George: Don't we have a deal with the pigeons?
Jerry: Of course we have a deal. They get out of the way of our cars, and we look the other way on the statue defecation.
— Seinfeld, "The Merv Griffin Show"
Advertisement:

Most birds fly. Most birds are also not potty trained (even the Clever Crows). Therefore, it's statistically likely that a bird will poop on something or somebody inappropriate while flying or perching. And, of course, a lot of people (especially children) like Toilet Humour, so naturally, there will often be jokes about birds pooping in the wrong place at the wrong time.

The bird in question is often a pigeon or a gull as they are common, but any (usually flight-capable) bird will do.

Sometimes, the idea of birds pooping on people is likened to an attack (after all, aerial attacks and birds pooping from above are both unwanted and involve things falling from the sky, although bird poop is considerably less dangerous) and some satirical works may have birds pooping on people or things on purpose. Another parody is having flying dinosaurs poop on characters or things. It is also sometimes referred to as "whitewashing" because bird poop is generally accompanied by bird urine, which is thick like paint, and white.

Anyone can be on the butt end of a Bird Poop Gag, but it's especially common for people with prized objects (so the object gets pooped on), antagonists, sticks-in-the-mud, and unlucky people.

Compare Urine Trouble for another gag revolving around animal waste, and Balloon-Bursting Bird for the other ways birds do to ruin people as gags. Often involves Pesky Pigeons.