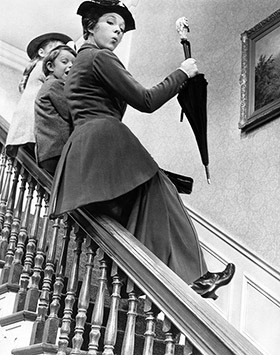 Any comedy whose set includes an elaborate winding staircase with a long, swooping banister will inevitably require someone to slide down, or up, that banister. Such slides are always rear-end first.

Half of the time, the slider will not realize until it's too late that there's a mounted knob, known as a finial, at the very bottom just waiting to hit them in the crotch. The other half of the time, either there is no finial (as is the case in the opening to Wait Till Your Father Gets Home) or it will break off harmlessly when the slider hits it. In either of these cases, the slider then ends up sprawled on the floor. More often than not, they'll be more concerned about embarrassment than injury. Basically, it all depends on the sturdiness of the banister.