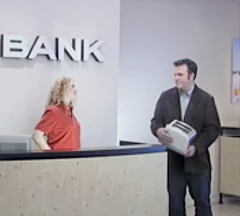 Bank + Toaster, You do the math!
Advertisement:

Banks love finding ways to get new people to deposit their money with them and open an account. Decades ago, they would give away free toasters, alarm clocks, or other cheesy home electrical appliances to new customers, which grew to be an expected perk for opening a new bank account. Indeed, the free toaster became so closely associated with new bank accounts that it has influenced how banks are depicted in American media and popular culture.

Whenever there is a scene in a bank, the Bank Toaster can commonly be invoked in signs or promotional displays advertising new accounts or in character dialogue. If one of these toasters is established as part of a promotional display at the beginning of a bank scene, certainly anticipate something happening to it by the scene's end.

In bank robberies, the Bank Toaster usually comes up as a comedic device, such as an item Stupid Crooks may try to steal either in a last-ditch attempt to take something from the bank after any effort to take the money has failed or in a clueless mix-up/failure to realize there would be something more valuable to take from the bank.

After the 2000s, banks have transitioned to providing cash incentives or consumer electronics as an incentive to do business with them, turning this into a Forgotten Trope. These rewards are provided to the customer after the account has been available for a set amount of time and a certain number of deposits have been made to the account, to prevent individuals from opening an account simply to take advantage of the promotion.