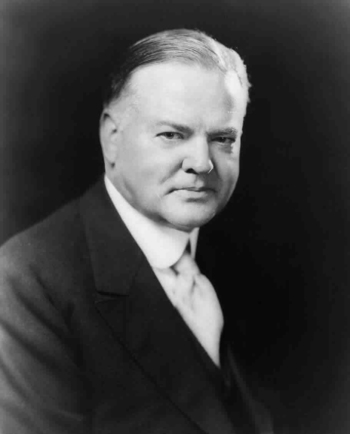 "What this country needs is a great poem."
"With impressive proof on all sides of magnificent progress, no one can rightly deny the fundamental correctness of our economic system."
— Herbert Hoover in 1928, one year before The Great Depression began.
Advertisement:

Herbert Clark Hoover (August 10, 1874 – October 20, 1964) was the 31st president of the United States (1929–33), serving between Calvin Coolidge and FDR, and the twelfth from the Republican Party. A good person who got caught in an unworkable situation, he had The Great Depression begin during his watch, but — contrary to widespread sentiment at the time — he didn't cause it.

Ironically enough, prior to his presidency Hoover was known as something of a miracle man, especially with his humanitarian aid. Originally a mining engineer, he rose up the corporate ranks at a British mining firm in Australia, Russia,note Decades after his work there, the CIA used his personal maps and records of the Kyshtym area to pinpoint a major Soviet plutonium plant.

and China. While in the latter country — inspired in part by his Quaker faith — he began to take up humanitarian causes, trying to improve the lot of his workers and the Chinese in general. (He and his wife Lou Henry also learned some Mandarin; they would later use it to keep from being spied on in The White House.) He eventually started his own mining consulting firm; by his 40th birthday in 1914, Hoover had investments in every continent but Antarctica, offices in six cities around the world, and a personal fortune of $4 million (that's about $97 million in 2016 dollars). At the same time, he lectured and wrote about mining and—with Lou Henry (a noted Latinist and geologist in her own right)—translated and annotated the massive 16th-century mining guide De re metallica

from Latin (the first time ever into English and still highly regarded; it remains in print as the authoritative English translation, and influenced translations into other languages).

During World War I, he led an American program to distribute food to needy people, first and foremost those living in those allied to America. And his humanitarianism was such that it was reported a letter addressed to "Miracle Man, Washington DC" was delivered straight to him. He served as the Secretary of Commerce under Warren Harding and Calvin Coolidge, further increasing his popularity with the public. Due to the economic prosperity of the time, he won the election of 1928 rather easily. He's the last person to be elected President after having been a Cabinet member, and one of only three men to ascend to the White House without having either been a general or ever gotten elected to public office before (the other two being William Howard Taft and Donald Trumpnote Zachary Taylor, Ulysses S. Grant, and Dwight D. Eisenhower hadn't been elected to anything before, either, but they were famous generals, rather than civil servants like Taft or Hoover.). By the way, his equivalent up north was Richard B. Bennett, another one-term head of government who also has the misfortune of being known mainly for his lack of success in fighting the Great Depression.

During the Depression, his public image went very far south, very quickly. Starting with the Stock Market Crash of 1929, the American economy chaotically saw the prosperity of the 1920s turn into the worst economic crisis in world history. From beginning to end, Hoover's presidency saw unemployment rise to an astounding 25% of the workforce, over 60% of the population falling into poverty, the once-prosperous farms of the Great Plains becoming the desert of the Dust Bowl, and the Dow Jones losing over 88% of its value in four years.note This crash was so bad that it wasn't until 1955 that the stock market fully recovered — over twenty-five years later! America needed to blame somebody, and he was the most prominent and easiest target available. The actions pursued by the administration usually made it even worse: for example, the Smoot-Hawley Tariff, a 60% tariff that was meant to protect American businesses from foreign competition, only caused a trade war as other countries raised their tariffs in response, crippling international trade and deepening the economic crisis. In fact, over 1,000 economists signed a petition begging Hoover not to sign the tariff bill. There was also some spectacular mishandling of the Federal Reserve which prevented it from doing pretty much anything it could have done to help the economy and everything it could have done to worsen it. Damn near every major sign of poverty a person could have around them was branded irrevocably with Hoover's name — turned-out pockets were "Hoover flags", and shanty towns set up for the influx of homeless (like a well-known example in Central Park in New York City) were called "Hoovervilles." Most infamously, when 20,000 World War I veterans marched on Washington demanding their pensions to be paid out early, since they couldn't get work, Hoover sent General Douglas MacArthur and the army to clear them out forcefully. Instead, MacArthur went further than planned and used weapons and tear gas to force them to leave, outraging the public.note Famously, then-candidate Franklin D. Roosevelt sent his wife, Eleanor, with food and charitable goods, drawing a very clear line between the two men in the public's mind. Hoover had been a humanitarian, sure, but he was also a Self-Made Man who was less than thrilled about giving public handouts.

With no end to the Depression in sight, Hoover and the Republicans easily lost the election of 1932 to Franklin D. Roosevelt and the Democrats. However, towards the end of his term, Hoover switched positions and admitted that the economy genuinely needed the government's help. Some of the actions that he then took, such as increased corporate taxes and public works projects (most famously the Boulder Dam near Las Vegas, which is now called, fittingly enough, the Hoover Dam), served as the blueprint for Roosevelt's (comparatively) successful New Deal, though Hoover felt that Roosevelt went too far in that direction.note For what it's worth, the Supreme Court agreed to some extent, striking down some of the New Deal provisions as unconstitutional. Additionally, Hoover's treatment of Latin American nations during his presidency was an important influence on Roosevelt's "Good Neighbor" policy towards America's southern neighbors during World War II. It was Hoover who finally withdrew American troops from Haiti and Nicaragua after years of occupation. Hoover's nomination of Charles Evans Hughes as Chief Justice of the Supreme Court caused FDR some trouble for the rest of the 1930s because he usually opposed the most ambitious New Deal proposals.

Hoover tried to meet with Roosevelt following the latter's election to work together on programs to help the country (Hoover didn't want to start a program that FDR would have to carry out without getting Roosevelt's buy-in on it), but Roosevelt rebuffed all such attempts. It has been suggested that he didn't want to be forced to share credit with Hoover.

After his presidency, Hoover rehabilitated his reputation through further charity work (both in poor Third World countries and in Germany after World War II), his work with the Boy Scouts of America, and by publicly denouncing the draconian Morgenthau Plan.note It was proposed by and named for Treasury Secretary Henry Morgenthau, Jr., who aimed to prevent future German aggression by destroying Germany's industrial capacity. He also worked with two of his successors, Harry Truman and Dwight D. Eisenhower, as leader of a board that advised the president on how to make the federal government more efficient. By the time of his death he was again one of the most admired men in America, but few seem to know or remember this today.

He lived a very long time; Hoover was the first former president since John Adams to live to 90 years and had the longest retirement of any former president until he was surpassed in 2012 by Jimmy Carter (who, coincidentally, is also far more acclaimed for his non-presidential career than for his time in the Oval Office). Additionally, he didn't just outlive his two predecessors alive at the time of his inauguration; he also outlived two of his successors, dying nearly 32 years after his term was over in late 1964.note Conspiracy theorists who whisper about the Presidential Guard rehearsing a funeral just before Kennedy's assassination forget, or in some cases omit, that the Guard was actually rehearsing for Hoover, whose death had been expected. As it turned out, he held on for a year. With Roosevelt and Kennedy having died in office, Hoover’s death was also the first death of a former president since Coolidge’s all the way back in 1933.note He's also the most recent ex-president who died during a campaign period. Out of respect, then-President Lyndon Johnson and his challenger Barry Goldwater suspended their campaigns for a week. And he lived through three of the four presidential assassinations (in addition to Kennedy, he was also alive when James Garfield and William McKinley met their respective ends).

Just before the election of 1928, Hoover was in charge of recovery efforts after the Great Mississippi Flood of 1927. More humanitarian laurels, but he also struck an unfortunate deal with African-American leaders where he promised to champion Black causes during his upcoming presidential run and expected presidency in exchange for patience with the (lack of) assistance going to Black flood victims. Hoover never delivered on his promise; this, combined with clever Democratic position and maneuvering, is how the Party of Lincoln lost the Black vote. To be fair to him, he had the whole Depression thing to deal with while he was in office, and that was kind of a big deal.

The naming of Hoover Dam was originally rather controversial, as it was his own Interior Secretary, Ray Wilbur, who first coined the name in 1930. Wilbur justified his decision by citing other such public works named for presidents, but none had been named for a sitting president, much less one whose popularity was in steep decline. Despite efforts by the FDR administration to have Boulder Dam be its official name, "Hoover Dam" had gained enough popular usage that both names were used interchangeably. It wasn't until 1947 that Hoover Dam became its official, legal name; by then, Hoover's image was sufficiently rehabilitated (and he was removed enough from his term of office) for the name to be well-received.

He's also the only president born in and native to Iowa, although when elected he legally resided in California (making him the first of three Californian presidents, Richard Nixon—a Southern California boy born and raised, and incidentally also the only other president to have been a Quaker—and the Illinois-born Ronald Reagan being the other two; and of the three, he is the only one whose connections were to Northern California—his mining firm's offices were in San Francisco). Either way, he was the first president born in and elected from a state west of the Mississippi River. Also, "The Star-Spangled Banner" officially became the country's national anthem, and the Empire State Building was completed, both in 1931.

His Vice President, Charles Curtis, was close to half Native American, specifically having three of his eight great-grandparents coming from the Kaw Nation, and was the first non-White person to hold the position, a distinction he held alone for nearly a century until Joe Biden's VP, the half-Black, half-South Asian Kamala Harris, took it in 2021.

And in case you were wondering: no, he and longtime FBI head J. Edgar Hoover were not related in any way. Nor did either man have anything to do with the manufacture of vacuum cleaners (although two different men named "Herbert Hoover" were in charge of the company of that name during its history).