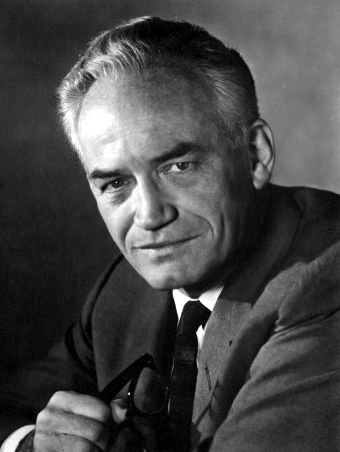 In your heart, you know he's right.note His 1964 presidential campaign slogan. Infamously countered by Democrats with: "In your guts, you know he's nuts" or "In your heart you know he might" — a reference to the possibility of Goldwater using nuclear weapons.
"Those who seek absolute power, even though they seek it to do what they regard as good, are simply demanding the right to enforce their own version of heaven on earth. And let me remind you, they are the very ones who always create the most hellish tyrannies. […] I would remind you that extremism in the defense of liberty is no vice! And let me remind you also that moderation in the pursuit of justice is no virtue!"
— From his acceptance speech as the 1964 Republican presidential candidate
Advertisement:

Barry Morris Goldwater (January 2, 1909 – May 29, 1998) was an American politician, statesman, businessman, US Air Force officer, and author from Arizona, representing that state in the U.S. Senate from 1953 to 1965, then again from 1969 to 1987; he held each of the state's two seats in the Senate at different times. He previously served in the US Army and Air Force during World War II and The Korean War.

Goldwater is the politician most often credited with having sparked the resurgence of the American conservative political movement in the 1960s, after he became the Republican Party's nominee for president of the United States in 1964; he was literally nicknamed "Mister Conservative" for his outspoken opposition to the New Deal consensus. Although he was raised as an Episcopalian and worshiped at churches in that denomination, Goldwater was the first ethnically Jewish candidate (his father was Jewish) to be nominated for president by a major American party. Despite his loss to President Lyndon Johnson in the general election in a landslide,note To wit, Johnson won 486 votes in the Electoral College to Goldwater's 52 and beat him in the popular vote by 22.6 percentage points nationwide. In an ironic reversal of how the national presidential map had usually looked for over eight decades before, five Deep South states — Alabama, Georgia, Louisiana, Mississippi, and South Carolina — were the only states to vote Republican besides Goldwater's native Arizona (and he was the first GOP presidential nominee ever to carry Georgia, as well as the first to carry Alabama, Mississippi, and South Carolina since the Reconstruction era after the Civil War). Meanwhile, Johnson swept the Northeast, where Goldwater was deeply unpopular; he (Johnson) even became the first Democrat to carry Vermont in a presidential election. many political pundits and historians believe he laid the foundation for the conservative revolution to follow, as the grassroots organization and conservative takeover of the Republican Party began a long-term realignment in American politics helped to bring about the victory of Ronald Reagan in the 1980 electionnote In a curious irony, Goldwater barely held on to his Senate seat when he ran for re-election the same year, as he faced a much tougher than expected challenge from Democratic businessman Bill Schulz and only secured victory when the absentee ballots were counted. and the "Reagan Revolution" of the 1980s. Appropriately, Reagan first became known in national politics with his "A Time for Choosing" speech, in which he endorsed Goldwater's 1964 presidential campaign. The Washington Post columnist George Will would write: "We […] who voted for him in 1964 believe he won, it just took 16 years to count the votes." He retired from the Senate in 1987 and was succeeded by Congressman John McCain, who praised his predecessor as the man who "transformed the Republican Party from an Eastern elitist organization to the breeding ground for the election of Ronald Reagan."

He was married to Margaret Johnson and Susan Shaffer Wechsler, and had four children, including Barry Goldwater Jr., who served in the House of Representatives from California from 1969 to 1983.

Goldwater died in 1998 after complications of a stroke; he was also suffering from Alzheimer's disease.