Theatre / All the Way 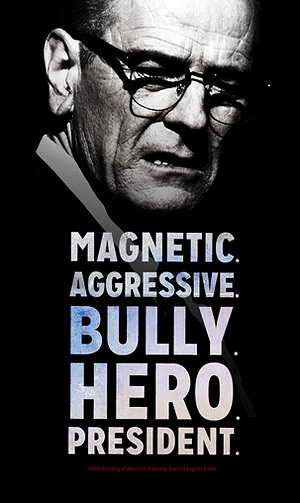 "What's the point of being President if you can't do what you know is right?"
—Lyndon Johnson
Advertisement:

All the Way is a drama play written by Pulitzer Prize-winning playwright Richard Schenkkan. It covers the first year in the Presidency of Lyndon Johnson, as he is thrust into power following the assassination of John F. Kennedy and struggles to solidify his legitimacy and ensure reelection. This means maintaining the Vietnam War, and most importantly, passing the Civil Rights Act. To do so, we see him charming, threatening, and manipulating such figures as J. Edgar Hoover, Martin Luther King, Jr., George Wallace, and Hubert Humphrey. The play has been praised as an engaging and ambitious look at the toll being in politics can take on one's soul.

The play premiered at the 2012 Oregon Shakespeare Festival, with Jack Willis playing LBJ. It later moved to Cambridge Massachusetts in a show starring Bryan Cranston. The latter show eventually made it to Broadway, and was a critical and financial hit winning both the Tony and Drama Desk awards for Best Play and Best Actor for Cranston. All three production were directed by Bill Rauch.

A follow-up, The Great Society (covering the Johnson presidency from 1964-1968), opened at the 2014 Oregon Shakespeare festival, again directed by Rauch and starring Jack Willis. It opened on Broadway in fall 2019, with Bryan Cox taking over the role of LBJ.

Steven Spielberg obtained the rights to produce a film adaptation of All the Way, which aired on HBO in 2016 with Bryan Cranston reprising the lead role, Anthony Mackie playing Martin Luther King, and Melissa Leo as Lady Bird Johnson, with Jay Roach directing.

Tropes Associated With All The Way include: