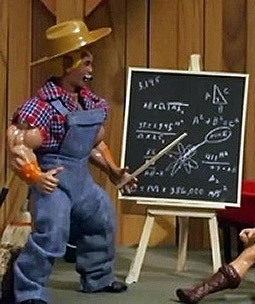 You can always count on him to solve a practical problem.
"I know I don't sound the part. Get raised by brahmin ranchers, and you never lose the twang. Drives Hildern crazy. But I know every inch of the power grid from Hoover Dam to Shady Sands."
— Dr. Angela Williams, Fallout: New Vegas
Advertisement:

An inversion of the "idiotic redneck" stereotype people from the Deep South often have attached to them, in a similar mould to Black and Nerdy.

This character may have the same down-home sensibilities or otherwise act like a good ol' southerner, but is very, very smart. Maybe they exhibit Sesquipedalian Loquaciousness alongside their Southern vernacular, maybe they have a teleporter in their garage, maybe they have 12 Ph.Ds, who knows. The juxtaposition is often helped by a cornpone Hayseed Name.

The Simple Country Lawyer exemplifies this trope; he uses his intelligence and accent as a weapon, talking in simple allegories and colloquialisms in order to make people think he's a moron, then brutalizing them with his superior wit.