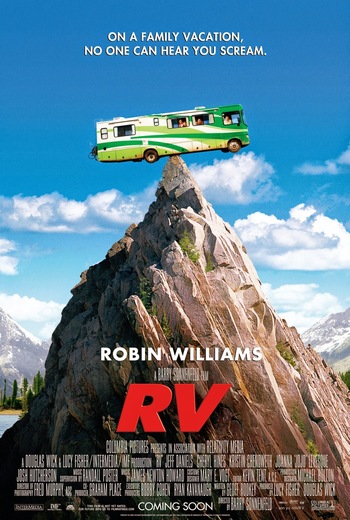 RV is a 2006 comedy film, directed by Barry Sonnenfeld and starring Robin Williams, about a Dysfunctional Family who go on vacation in a shoddy RV.

Executive Bob Munro (Williams) is stressed, feeling threatened of losing his job and his lifestyle, since his abusive boss Todd Mallory (Will Arnett) hired the Stanford's geek Laird (Richard Cox) to work in their soda's company. Bob has promised his wife Jamie (Cheryl Hines), his teenage daughter Cassie (Joanna "Jojo" Levesque) and his young son Carl (Josh Hutcherson) to spend vacations in Hawaii, but Todd demands him to prepare a presentation and attend a business meeting with the owners of a family company in a merging operation scheduled in the same period.

Concealing the real reason of going to Colorado to his family, Bob rents a recreational vehicle and tries to convince his dysfunctional family that a road trip to the Colorado Rocky Mountains would be good to bring old values back to their family. After many incidents and while in the trailers parking area, the rookie Bob is helped by the friendly but somewhat bizarre Gornicke family—consisting of Travis (Jeff Daniels), Mary Jo (Kristin Chenoweth) and their kids Earl (Hunter Parish), Moon (Chloe Sonnenfeld), and Billy (Alex Farris). The Munros escape from the Gornickes and initiate a journey of difficulties and leaning, retrieving their forgotten family bond.

Before you can say "COME BACK! COME BACK!," things go gloriously, hilariously, annoyingly wrong due to the lack of brakes, Bob's job, toilet waste not cleared out from the last rental and more hilarious stuff.

The film grossed over $80 million worldwide, but received mostly negative reviews from critics, most of which call it sweet yet blunt and predictable. It currently holds a 24% on Rotten Tomatoes.