Pretty Fly for a White Guy 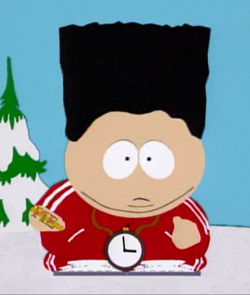 "S'up, homies?"
"Officer, you only pulled me over because I think I'm black."
— MAD spoof of 8 Mile
Advertisement:

If you don't, you will look silly at the very least imitating shallow and superficial elements of a particular culture. Worse, in fiction (and on the Internet), wars have started that way.

Another variation is white people, usually otaku, who are obsessed with Japanese culture. These people are often called "Wapanese" or, due to the efforts of 4chan, "weeaboos."note It is often said that you can still like the Japanese culture and not be a weeaboo, but if you reject your native culture in favor of a stereotyped and distorted image of Japanese culture formed from only consuming highly stylized media, that is being a weeaboo.

Contrast Mighty Whitey for when a white person enters a non-white culture and becomes its greatest member, and The Whitest Black Guy for when one has trouble fully-identifying with one's own group. In terms of gender, Camp Gay and Camp Straight can be described as Pretty Feminine for a Man (or Pretty Gay for a Straight Guy in the latter case), while the Butch Lesbian and The Lad-ette can be described as Pretty Masculine for a Woman.

Weird Al's song "White & Nerdy" depicts a white guy who laments that he's too nerdy to hang out with "the gangstas". Yet throughout the song, he also boasts about just how nerdy he is through his abundance of hobbies and interests.

Weird Al's song "White & Nerdy" depicts a white guy who laments that he's too nerdy to hang out with "the gangstas". Yet throughout the song, he also boasts about just how nerdy he is through his abundance of hobbies and interests.