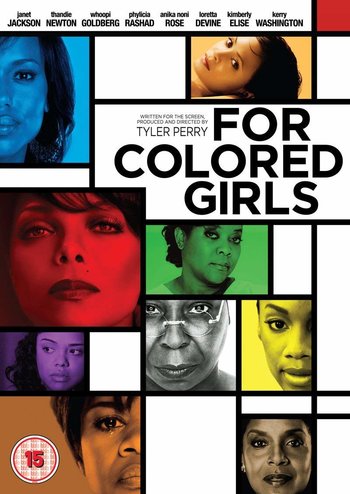 "Ever since I realized there was someone called a colored girl, or an evil woman, a bitch, or a nag, I've been trying not to be that, and leave bitterness in someone else's cup."
—Juanita (Lady in Green)
Advertisement:

A 1975 stage play by Ntozake Shange, For colored girls who have considered suicide when the rainbow is enuf eventually went on to become one of the most acclaimed works of African-American literature. In 2010, the film version, shortened to its first three words was released. Tyler Perry wrote, directed and produced the film, which stars an All-Star Cast of prominent African-American women.

The play itself is called a "choreopoem," a collection of 20 poems starring seven different women, each referred to by a color. Each woman has a story to tell: from domestic violence, to abortion, and rape. In the end, the seven women come together for "a laying on of hands."