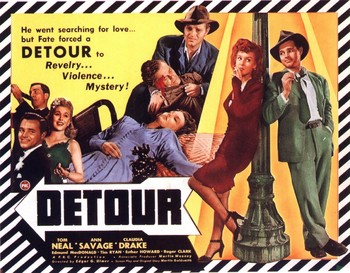 "That's life. Whichever way you turn, Fate sticks out a foot to trip you."
Advertisement:

Al Roberts (Neal) is a piano player at a rather seedy nightclub in New York City. When his girlfriend Sue lights out to Hollywood to try and make it in the movies, Al follows her. He's hitchhiking through Arizona when he's picked up by a man by the name of Charles Haskell. Things go downhill from there, however, as a freak accident along the road during the night results in the death of Haskell. Worried he'll be arrested for the man's death, Al hides the body along the side of the road, taking possession of Haskell's car and assuming his identity to avoid any potential trouble, at least until he makes it to Hollywood.

However, it soon becomes apparent that Haskell was not as wholly innocent as he seemed, as Al finds out when he picks up a beautiful drifter along the road named Vera (Savage), a woman who seems to be wholly familiar with Haskell and instantly takes Al for the imposter he is, leading to a tense, teeth-gritting relationship as the vicious, conniving Vera strings an unfortunate Al along on a detour most shady and criminal in nature...

Detour was produced by Producers Releasing Corporation, a "Poverty Row" studio that usually confined itself to cheap disposable B-Movie productions. While still being shot relatively quickly and cheaply, Detour was more artistically ambitious than the time-fillers that constituted most of PRC's productions, with Ulmer managing to evoke a uniquely gritty, indelibly dark atmosphere simply through the use of the low-rent production afforded him, as well as through the masterfully vicious acting of Ann Savage as Vera, whose performance would go on to regularly be cited by film critics as one of the best femme fatales in cinematic history.

A straight-to-video remake which starred Tom Neal Jr., the actual son of the original film's star, was released in 1992.