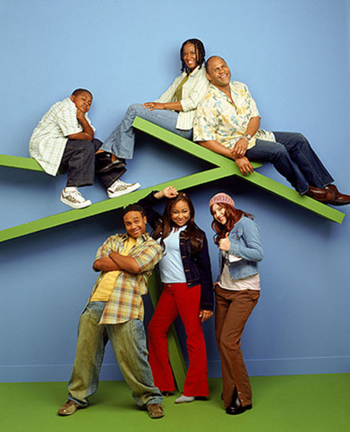 She's also the only one wearing a hat.
"Every Black entourage needs one white person. White friends are the human passports that legitimize Black existence and allow Black people to travel through the world of whiteness unencumbered. It's why they invited Eminem to perform at the Super Bowl halftime show. Who else on that stage could have gotten away with kneeling in solidarity with Black Lives Matter without causing a months-long national scandal?"
— McSweeney’s, "Tips for Black Men Trying to Withdraw Money from Their Own Bank Accounts

The Cyclic Trope side of the Token Minority. A show might have an all-minority cast, such as focusing on a Black family or a Multinational Team, but the white blonde-and-blue-eyed portion of the audience will not be left out, either.

On a Sitcom, they're often either the "uncool" one or the ditz. This is probably because the others are viewed as less Acceptable Targets, but when you really think about the implications of the white member of a diverse group being lame, it starts to seem like a Broken Aesop. On a Black Sitcom they're often comic relief or a Cloud Cuckoolander, though they can be academically smart.

A white member of a multi-ethnic team tends to stand out even more than the traditional Token and is more likely to be lampshaded. When the Very Special Episode about racism comes along, it won't be about them. If the episode is about learning about and respecting someone else's culture, they'll be the one who needs to learn it most, and it's never about their own culture.

In some cases, the token white will be part of a non-racial minority group, such as being disabled, LGBT, or Jewish. Being ginger could count as well if the show is set in Europe. Whatever the case, the token white's whiteness might still make them an Acceptable Target, but their own minority status will not, and might give the others something to learn about tolerance.

Rarely the token white might actually double up as a token minority in the racial sense, if the series takes place in countries where whites aren't common, such as Japanese Media.

This trope is largely restricted to Western media, although some other countries have their own local variants.

Contrast White Male Lead, in which the sole white character is the lead.