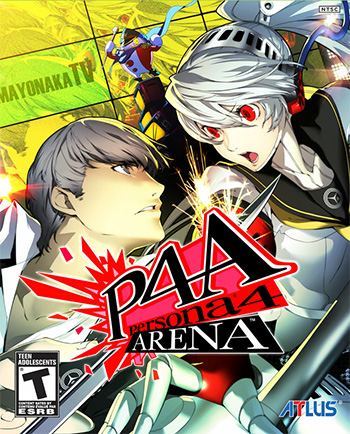 Am I a friend to me?
Rivals. They are... friends, yet powerful foes! The desperate fighting program amongst high school students! A new legend is about to start!
— The P-1 Grand Prix Introduction
Advertisement:

Persona 4: Arena, or Persona 4: The Ultimate in Mayonaka Arena in Japan, is a fighting game sequel to Persona 4 and, to a lesser extent, Persona 3, developed by Arc System Works under the supervision of Atlus' Team Persona. The gameplay is similar to BlazBlue with the stand system from JoJo's Bizarre Adventure: Heritage for the Future.

The game is set three months after the end of Persona 4 and two years after the end of Persona 3. Life has returned to normal for the Investigation Team from Persona 4; that is, until Teddie suddenly turns up on the Midnight Channel to announce the "P-1 Grand Prix", a bombastic fighting tournament to determine just who is the strongest Persona-user in the world. Noting a strange shift in Teddie's personality, the Investigation Team decide to reunite and make sure this is nothing more than a friendly competition.

Meanwhile, the remnants of S.E.E.S. from Persona 3 have formed a new organization dedicated to the continued suppression of Shadow activity across the world. When a piece of valuable equipment goes missing from a Kirijo Group lab, three members of the Shadow Operatives — Mitsuru, Akihiko, and Aigis — track it to Inaba and stumble across the P-1 Grand Prix. Finding the tournament to be suspicious, the trio decide to investigate it for themselves.

The game hit Japanese arcades in March of 2012, with a PlayStation 3 and Xbox 360 release on July 26 and August 7 in Japan and America, respectively. The European release date was eventually confirmed for May 10 2013, being published by Zen United. The Xbox 360 version of the game can be played on Xbox One via backwards compatibility.

The Arcade build of the game began with 10 characters, but 3 more were added through timed releases (Labrys, Elizabeth and Shadow Labrys). The complete roster is as follows:

Has a sequel, Persona 4: Arena Ultimax. Characters from Persona 4: Arena are featured in the Massive Multiplayer Crossover BlazBlue: Cross Tag Battle along with BlazBlue, Under Night In-Birth, RWBY and Arcana Heart characters.

This page contains spoilers from both Persona 3 and Persona 4. You Have Been Warned!