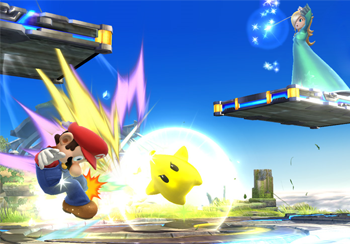 Don't mind me up here; I'm just gonna keep having my Luma beat you up.
Advertisement:

In most video games, it's usually assumed that the player is in control of a single character. However, in recent years video games have been trying to overcome this by giving the character control of two entities at the same time.

A Puppet Fighter is a character from a video game—particularly Fighting Games—who has the ability to actively control two separate persons or entities simultaneously. Usually there will be one entity that acts as the main character, with the other acting as an extra tool, hence the "Puppet" in the trope name. They may either start off with the puppet on stage or they may keep the puppet off the battlefield except when certain attacks are used.

Done poorly, these can result in a Game-Breaker because they can control more of the screen than any of the cast. These characters may be balanced by creating an execution barrier to be able to get the puppet in control at all, losing options when they have the puppet in play, or placing a limit on how much the puppet can be used. However, they just as often dominate the tier lists.

This is strictly a Video Game Trope about the player controlling a character that has multiple entities. Any examples from media who control other characters or objects are likely a different trope.

Not directly related to Marionette Master, though the two can overlap. Compare to Minion Master and Assist Character. The puppet in question may be an Attack Animal.