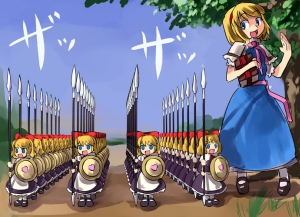 This guy doesn't fight via his own power; he has an army of Perverse Puppets—that he controls via strings, magic, or advanced technology—to do it for him. Particularly sadistic ones can also make People Puppets. See also Evil Puppeteer.

A Subtrope of Art Attacker and The Beastmaster. May overlap with Robot Master or Wicked Toymaker.

Not to be confused with Puppet Fighter, a metaphor to describe a certain type of gameplay.