"You know what I love about machines? They do what they're told."
— Doctor Ivo "Eggman" Robotnik, Sonic the Hedgehog (2020) 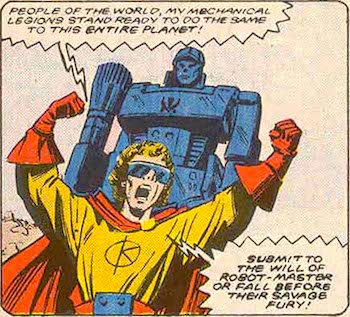 A scientist who specializes in building or maintaining robots.

If he is a Mad Scientist, this skill will probably manifest as an ability to effortlessly manufacture Mecha-Mooks in bulk. Robots don't have to be his only area of expertise (as a mad scientist, he's probably also an Omnidisciplinary Scientist), but he's a Robot Master if robot-making is far and away his most commonly displayed skill. For instance, Doctor Doom is a scientist who builds robots periodically, but fellow Fantastic Four enemy the Mad Thinker builds robots virtually every time he appears.

Just building one robot doesn't qualify you for this trope. This is for people whose resumés are more than 50% taken up with robot-building or at least robot-fixing.

Not to be confused with the Mega Man (Classic) Robot Masters, though this trope does apply to their creators.

May or may not overlap with Marionette Master. Many Igors qualify, depending on their bosses' area of expertise. Compare with Drone Deployer and The Turretmaster (for different kind of "robots") and Wicked Toymaker. If you were looking for a robot that is a master, see Master Computer.