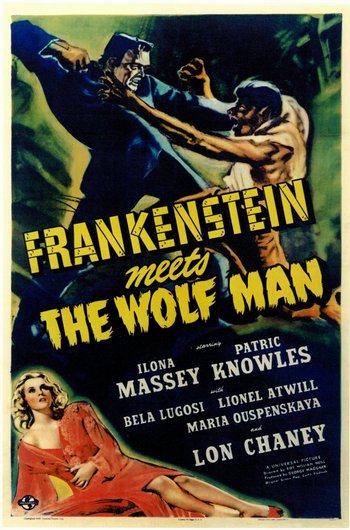 "Stop it Frank!" "My name is not Frank!"
A death fight...between two beasts!
Advertisement:

Frankenstein Meets the Wolf Man is a Universal Horror movie from 1943. It is a Crossover sequel for both The Wolf Man (1941) and The Ghost of Frankenstein and it is Universal's first Monster Mash film. It is today also recognized as the film that established the first "shared universe" by establishing that the four preceding Frankenstein films, along with The Wolf Man existed in the same universe. Later Universal films would also add the three Dracula films and a version of The Invisible Man to this shared universe.

Four years after his death in The Wolf Man, Larry Talbot (Lon Chaney Jr.) is awakened from his slumber when two vagrants open his grave. After instantly transforming into a Wolf Man and killing one of them, he finds himself in Cardiff, Wales.

After his warnings of his lycanthropy are ignored, he escapes and starts searching for the Gypsy-woman Maleva (Maria Ouspenskaya), in hopes that she'll know how to kill him permanently. The two set out for the Eastern European village of Vasaria, where, according to Maleva, a certain Dr. Frankenstein lives.

After reaching the place and finding out that Dr. Ludwig Frankenstein is dead and his place is in ruins (as seen in the end of The Ghost of Frankenstein), they attempt to continue their journey, when Larry transforms yet again and in the next morning wakes up in the basement of the ruins. There he finds the Frankenstein's Monster (Bela Lugosi) trapped in a block of ice.

Enter Dr. Mannering (Patric Knowles) from Cardiff and the original Dr. Frankenstein's granddaughter, Elsa (Ilona Massey), and the clash between the monsters is about to begin...

Next up, Dracula joins the party in House of Frankenstein.

As the beast of supernatural and the monster of science clash, you will witness: