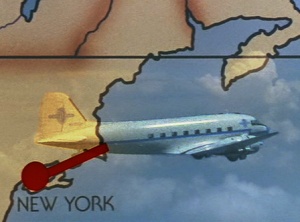 A form of Time-Compression Montage depicting a long journey, usually consisting of various shots of places along the route, the main character(s) on the journey, and frequent shots of a map, often with a line appearing on it to mark the route (or sometimes just a camera pan across the map). Alternately it can show the travelling character looking about in wonder as Stock Footage of various famous sites fades in and out around him, or as flags of various nations flow by. There may also be a Landing Gear Shot or two. Watch for Fridge Logic where, after traveling together for hours to days, the characters resume talking about their plans as if they didn't speak a word during the trip.

If the show is a comedy, or even a serious drama with humorous moments, and especially if the travel is a road trip, there may be hijinks, the taking of gag photos, glimpses of trouble, like running from an offended local or sleeping in a jail cell, and other character-driven scenes. Bonus points if it's the red-line-on-map scene. Even more points if the red line zig-zags and spiral chaotically.

Mickey around the world

Mickey, alongside Goofy, begin their 80-day trip around the world.

Mickey around the world

Mickey, alongside Goofy, begin their 80-day trip around the world.