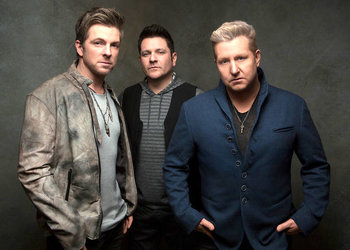 A prominent Country Music band known for its slick country-pop production. It was founded in 1999 by lead singer Gary LeVox, his second cousin Jay DeMarcus (bass guitar, piano, keyboards), and Joe Don Rooney (guitar). DeMarcus and LeVox first made themselves known as members of Chely Wright's road band, meeting Rooney after another musician in the band didn't show up.

Rascal Flatts signed with Disney's then newly-formed country music label, Lyric Street Records (a division of Hollywood Records), in 1999. The band led off its career with a highly successful album that produced four Top 10 hits. Next in the series came Melt, which produced their first Number One hit, "These Days." The band's momentum has continued through six studio albums and one Greatest Hits Album for Lyric Street. Following the 2010 closure of Lyric Street, the band was to have transferred to another Disney label, but instead went with the independent Big Machine Records.

The band's sound is quite divisive in country music: although it was always much closer to pop than most mainstream country, they were generally met with positive reception on their first albums. Starting with Me and My Gang, the band's sound has become much more processed and reliant on bombastic guitar and strings, after changing Record Producers from Mark Bright to Dann Huff. With the switch to Big Machine, their sound once again mellowed somewhat, culminating in their abandonment of Huff (except for one track) on 2014's Rewind. Starting in 2018, the band announced that it would be releasing standalone singles instead of full albums... followed in 2020 by the announcement of their retirement. However, their farewell tour was delayed due to the COVID-19 pandemic. After Joe Don Rooney's summer 2021 arrest for a DUI, he formally quit the band and Rascal Flatts quietly disbanded.