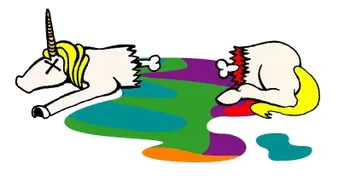 Don't be sad — it was never alive in the first place.
Advertisement:

A plot, character, or story element which is parodied or mocked as overused, even though it wasn't in broad use to begin with. The result is a strange metacontextual trick where viewers congratulate themselves on the death of something that never lived (hence the title).

The Butler Did It and Ultra Super Death Gore Fest Chainsawer 3000 are two of the most well-known examples.

A note for adding examples: Do not add examples to this index simply because you have personally never heard of them. Younger tropers should be especially careful of adding tropes that date back before their births: tropes such as the white wedding dress signifying virginity or the purported stupidity of Polish-Americans were real tropes at one point. Beware of your own small reference pool. Do not add examples just because they were never Truth in Television; they might still have been used seriously as tropes.

Another note: This trope is not about ideas or practices that the media depicts as being or having been common place, even though nobody seems to have ever actually done that (such as Droit du Seigneur); it's about parodies and deconstructions of tropes that never seem to have been played straight in the first place. Take Tinfoil Hat for example: few people can say they've ever met an actual conspiracy theorist who wore one of these, but the trope still doesn't qualify as a dead unicorn, as it is indeed played straight in the media quite frequently. If, however, we lived in a universe where fictional characters only ever Lampshaded the fact that conspiracy theorists don't actually wear these, even though no work had ever presented them as doing so, then it would qualify.

Contrast Undead Horse Trope, where the trope continues to be frequently played straight in spite of an abundance of parodies and subversions that would normally discredit it.