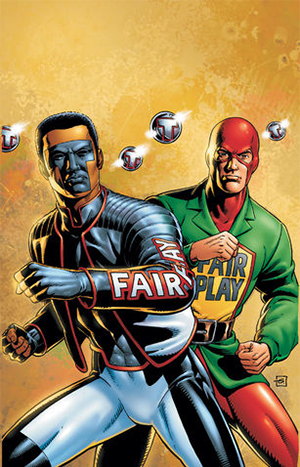 Mister Terrific is the name of a pair of DC Comics characters, the first of which made his first appearance in Sensation Comics # 1 in January, 1942. Terry Sloane was a brilliant polymath and Olympic athlete who by the age of twenty, had succeeded in everything he had ever wanted to do, and was left so much at a loss that he was nearly suicidal. Seeing an actual suicide, however, he instinctively saved her and used his abilities to rescue her brother from a life of crime. Realising there was more he could do in the world, he took the identity of Mr Terrific, "The Man of 1000 Talents", wearing a green and red outfit. He was a reserve member of the Justice Society of America, and was eventually killed in one of their team-ups with the Justice League of America (JLA Vol. 1 #171, "The Murder Among Us: Crisis Above Earth-One", October 1979).

His successor was introduced in The Spectre Vol. 3 #54 in June 1997. Like his predecessor, Michael Holt was a polymath genius and Olympic athlete. Also like his predecessor, he is introduced as suicidal, in this case owning to the death of his wife and their unborn child. He is told Terry Sloane's story by the Spectre, and is inspired to instead follow his example as a superhero. He subsequently becomes a core member of the new JSA, eventually being made their chairman.

A version of the Michael Holt version of Mister Terrific appeared in Arrow as Curtis Holt, portrayed by Echo Kellum.

The name was used as the title of a comic-book series published by DC Comics, one of the first of their New 52 initiative. The series follows the adventures of Michael Holt, the third-smartest man in the DC universe, who uses his scientific mind to fight crime and improve the world. After the series' cancellation, Mister Terrific was packed off to Earth 2, but later returned in The Terrifics.