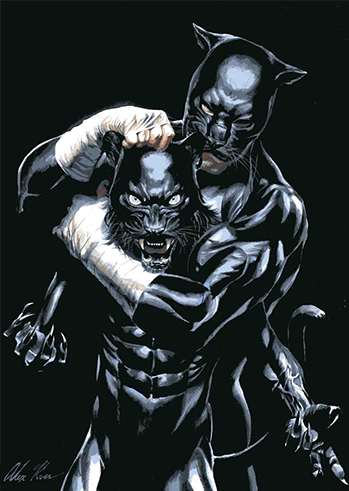 Wildcat is the name of several DC Comics characters, the first and most famous of which was created by Bill Finger and Irwin Hasen and made his debut in Sensation Comics #1 in January, 1942.

Golden Age hero Ted Grant grew up during the great depression and despite wanting to study medicine ended up using his fists to make money as a professional boxer instead. After a couple of fixers accidentally killed a boxer they'd drugged to ensure he'd lose a fight they framed Ted for the whole mess and then tried to have him killed to prevent anyone from learning the truth. When the hit went wrong and killed the cops instead of Ted he went on the run, and met a young boy who talked about Green Lantern (Alan Scott). Inspired by Lantern's example Ted vowed to clear his name and created a cat themed costume for himself, and the rest is history.

During World War II Ted joined the Justice Society of America, a hero team he would forevermore remain affiliated with.

Ted started a boxing club in Gotham and went on to become instrumental to the training of many other heroes, powered and Badass Normal alike. He discovered decades later his old club was still using his name and had been turned into a training ground for henchmen, providing them with combat skills and powered suits. He manages to shut them down despite knowing he's well past his prime and can't take on the heavy hitters with powers which reaffirms his place as a hero.

One of his boxing pals made Ted the godfather of his daughter Yolanda who picked up the Wildcat name after Ted was injured and retired from the role.

At a rather elderly age Ted, whose body is that of a younger man due to a number of time traveling and magical mishaps, learned he'd fathered an illegitimate son named Tom living in Brooklyn. During Ted's visits to get to know his son he discovered that Tom had powers when Tom rescued Ted from Vandal Savage. At this discovery Ted invited his son to the JSA and welcomed him to the use of Ted's Wildcat moniker for hero work should he be interested.

Others, like Hector Ramirez, have held the name for only a single issue.

Tropes applying to all Wildcats:

"I don't like fighting. Especially for exhibition."
—Tommy Bronson