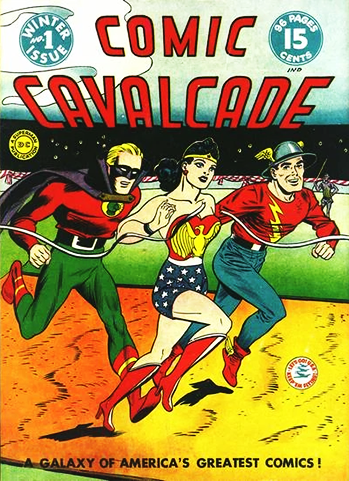 Comic Cavalcade was a DC Comics anthology comics published from 1942 to 1954. The comic had 32 more pages than other DC Anthologies of the time like Sensation Comics and All-Star Comics and thus cost five more cents. While the book started out as a superhero anthology at issue 30 it switched to focusing on funny animals from a series of theatrical cartoons put out by Columbia Pictures.

The three headlining characters were Wonder Woman, Green Lantern and The Flash who were selected specifically because each had their own ongoing title at the time, in Wonder Woman (1942), Green Lantern (1941) and All Flash. While each story told in this anthology is designed to stand alone the Wonder Woman stories were still connected to the overarching plot in her own title and Sensation Comics, though none of those stories needed to be read to understand the ones in Comic Cavalcade.

Significant features in the Anthology:

For the related characters see the Green Lantern (1941) Character Sheet.

For the related characters see the The Flash Character Sheets.