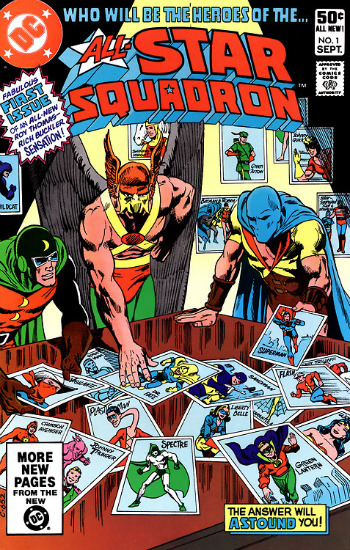 The masked legends of WWII you never heard about until now.
Advertisement:

A comic book series published by DC Comics in the Bronze Age starting in 1981. Coming out after DC's parallel worlds had existed for a while, and written by the continuity-obsessed Roy Thomas, this series took place during World War II on the parallel world of Earth-2, where DC's Golden Age characters were said to have existed.

The premise was that after the attack on Pearl Harbor, Franklin D. Roosevelt gathered together every superhero published by DC during the war period - including the entirety of the Justice Society of America - into a single superhero team, the All-Star Squadron. Thomas had done something similar prior to this series at Marvel Comics, in the original The Invaders. The team met in New York City in the Trylon and Perisphere, two structures that were created for the 1939-1940 World's Fair and in real life had been torn down for scrap metal for the war.

The phrase "retroactive continuity" was used (attributed to a fan) in the letter column in issue #18, which soon became "Retcon". The series was heavily based around retcons in the positive sense—it often told stories that happened between issues of real Golden Age series, gave characters origins who never had them, and cleared up plot holes and dangling plots from decades ago. It generally avoided the "everything you know is a lie" type of retcon, though there were some minor history changes. It also gave a decent explanation why the really powerful superheroes didn't invade the Axis powers to end the war overnight: Adolf Hitler possessed the mystic Spear of Destiny, which would take control the mind of any superhero who tried entering land under Axis control.

The Crisis on Infinite Earths destroyed Earth-2, which now never existed. This was not good for the book, which ended at issue 67 after a series of inventory stories dealing with character origins and a retelling of a classic Superman story in the new retconned Superman-less history. The book was succeeded by Young All-Stars, which replaced the now retconned Superman, Batman, Robin, Wonder Woman, and Aquaman, went a further 31 issues plus an annual, and is generally considered lower quality than the series itself.

The success of the series led to the launch of Infinity, Inc., whose characters appeared in the progenitor series thanks to Time Travel. James Robinson's Starman and Geoff Johns' Justice Society of America, two of DC's successes in the 00's, owe as much inspiration to Thomas' All-Star Squadron as they do to the original 40s comics and the Levitz/Staton revitalization in the 70s.

Tropes that apply to the series as a whole include:

Alternative Title(s): The Young All Stars