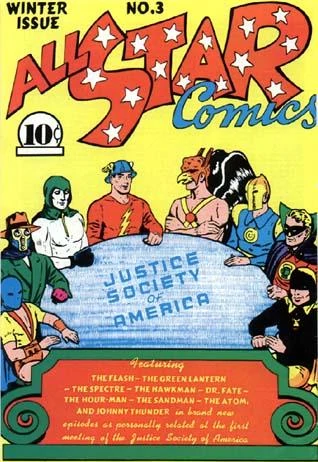 The first Super Team meeting
All-Star Comics is a DC Comics book famous for hosting the first ever Super Team, the Justice Society of America. The series ran for 57 issues from 1940-1951, and was then revived in 1976 for another 17 issues.
Advertisement:

For the first two issues All-Star Comics functioned as a traditional Anthology Comic with each story unconnected and featuring a specific character, in this case Hawkman, Sandman, the Flash, the Spectre, Hourman, Red, White and Blue, Ultra-Man and Green Lantern. This all changed with the introduction of the Justice Society of America in issue three, following which most of the stories are tied together by the framework of a JSA meeting, even though individual members each get their own tale in which the others rarely feature. These JSA storties are often the only tales in the book with one written two page Hop Harrigan story breaking up some of the individual tales. In issue eight, a story titled Introducing Wonder Woman was the first ever published appearance of the character who would go on to become comics' most iconic superheroine.