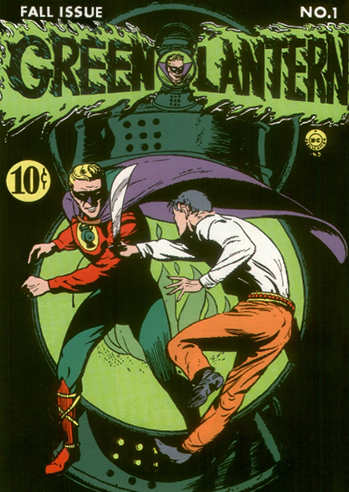 Into the humdrum reality of everyday life, into a world harassed by crime, there comes a fantastic being with strange supernatural powers. A being determined to stamp out evil and bring justice where it has never been before. This is the man called Green Lantern!
Advertisement:

Green Lantern 1941 is the first volume of Green Lantern which tells the adventures of the Golden Age Green Lantern Alan Scott.note Although he actually got his start in and ran up until superhero stories were phased out of All-American Comics.

The book ran for 38 issues before being cancelled in 1949. The first five issues and the seventh were written by Bill Finger, with Joseph Greene, Henry Kuttner, Alfred Bester, Robert Bernstein, John Broome and Robert Kanigher writing the remaining 33. Martin Nodell did the art through issue 25 with Alex Toth and Irwin Hasen working on the remaining 13 issues.