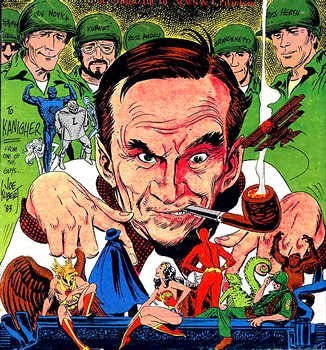 Kanigher as drawn by his friend Joe Kubert
Advertisement:

Robert (often just "Bob") Kanigher (1915-2002) was one of the most prolific and influential writers ever at DC Comics, in a career that spanned five decades.

He started writing in his teenage years - enough that he was able to write the book How To Make Money Writing with authority at the age of just twenty-eight. He also wrote in every medium available to the jobbing writer in the 40s, but it was in comics that he made his name.

His first (recorded) comics work was for Fox, writing the original Dan Garrett Blue Beetle, and soon after, the best-selling Captain Marvel Adventures, before joining All-American Comics, which would eventually become DC. He wrote the Justice Society, and then became the editor and writer of Wonder Woman, a title he would guide from 1946 all the way to '68. He also wrote what's often considered the first story of the Silver Age, introducing Barry Allen as the new Flash, created stalwarts like Metal Men, Black Canary and Batman villain Poison Ivy, and at one point or another, wrote probably every single DC hero.

His greatest success and lasting legacy, though, would come from DC's war comics. In '52, Kanigher (who claimed to be a veteran but according to other information had never served in the military having been rejected and classified 4-F)[1]

began editing and/or writing DC's five war comics.*  GI Combat, Our Army At War, Our Fighting Forces, All-American Men of War and Star-spangled War Stories. He introduced perhaps the most memorable war-comics protagonists, Sgt. Frank Rock and the men of Easy Company. Not only that, he also introduced the Haunted Tank, GI Robot, The Losers, Enemy Ace, the Creature Commandos and the Unknown Soldier (mostly with frequent collaborators Russ Heath and Joe Kubert on art). He would write Frank Rock and Co. regularly till his retirement. His influence in American war comics is immeasurable, particularly in the transition from gung-ho action stories to more downbeat and philosophical stories. Even writers primarily coming from the British war comics tradition, like Garth Ennis, have written his characters and acknowledged his influence.

In his writing career, Kanigher was also notorious for his particular sarcasm answering letter columns, his tendency to show up in his own comics to mock editorial decisions and his volatile temper (though his collaborators still regard him highly). Oh, and his formula to Make Money Writing? It's write a lot.