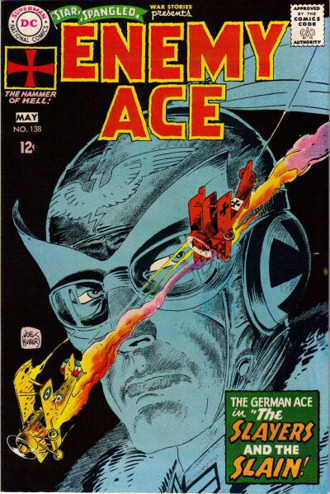 "When this conflict began, the Kaiser could not have envisioned a landscape so barren and devoid of life. A sea of mud that swallows the blood spilled across it. Am I simply a tool of war adding to the carnage? Am I here to kill — or protect those at home?"
— Hans von Hammer
Advertisement:

Enemy Ace is a DC Comics World War I feature about the fictional German ace Hans Von Hammer, the "Hammer of Hell".

Created by Robert Kanigher and Joe Kubert in 1965, it was inspired by tales of Manfred von Richthofen, the Red Baron. The character first appeared in Our Army at War #151 (February, 1965). The feature was groundbreaking in its portrayal of an "enemy" soldier as the sympathetic protagonist of a war comic. The stories typically drew a contrast between Von Hammer, a gentleman and "knight of the sky", and the horrors of a war that increasingly had no place for such chivalry.

Viewed as a cold-blooded and heartless killer even by his own men, Von Hammer often revealed his human side, brooding to himself or to a Black Forest wolf he often encountered on private walks, and regarded as a kindred spirit.

The focus of the stories is his aerial battles and internal brooding. The non-flight scenes tended to a precise formula in the middle of the story, usually including: a panel of Hammer walking away from his plane, as his fellow pilots mutter about the "killing machine"; a panel of Hammer brooding in his quarters, as his orderly natters in admiration; a few panels in which he visits his only friend, the wolf, in the Black Forest. Then he'd return to his plane and another aerial battle.

Later stories sometimes broke with formula by introducing colorful "costumed" Allied aces as adversaries, including The One-Eyed Cat, The Hangman (his only recurring opponent), The Harpy, The Skull Men and St. George, a British ace who actually wore a suit of armor in flight.

Von Hammer lost his lead feature slot in Star-Spangled War Stories in the early 1970s, eventually being replaced by Unknown Soldier, though occasionally reappearing throughout the decade. When the feature was briefly revived in the 1980s as a backup, it had something of a James Bond flavor, with adventures involving spies, Femmes Fatales, impersonators, etc.

Von Hammer's legacy was featured in the Batman story, "Ghost of the Killer Skies"note Detective Comics #404 (October, 1970). When sabotage and murder occur on the set of a movie (produced by Bruce Wayne) about Von Hammer's career, Batman investigates. Von Hammer himself does not appear... or does he?.

In later years, Von Hammer would occasionally turn up here and there, including at least one Time Travel adventure in which he met the Justice League of America. Other stories showed that Von Hammer survived the war. In the pulp-flavored 1920s-set Guns of the Dragon miniseries, von Hammer teamed up with an odd assortment of DC characters to fight the immortal Vandal Savage. In Garth Ennis' 2001 Enemy Ace: War In Heaven, we see von Hammer in an even more morally conflicted state, as he serves in the Luftwaffe during World War II. And the 1989 graphic novel Enemy Ace: War Idyll shows von Hammer dying in 1969, after a final interview with an American Vietnam veteran.