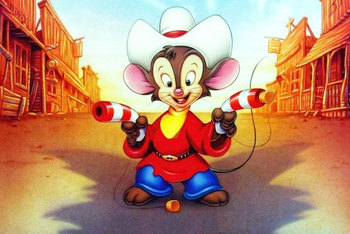 This character has the I Just Want to Be Special attitude, but the kind of "special" he wants to be is a gunfighter. What distinguishes the Wannabe from the Young Gun is that the latter usually just needs some training/experience/maturity to get up to speed, whereas the Wannabe lacks the talent or temperament to succeed as The Gunslinger.

He may have plinked cans in the backyard, and practiced his fancy draw in the mirror, but the Wannabe doesn't have the speed and accuracy he thinks he does. And he's going to challenge a real gunfighter just as soon as he gets up the nerve. This will not end well.

The Gunfighter Wannabe's storyline usually ends in one of three ways, with a couple of rarer variants:

A common variant of this is the Normal Fish in a Tiny Pond: sometimes the Wannabe is the fastest gun around, among the rather small group of people that he knows, and thinks he's really hot stuff, until a real gunfighter comes along.

In a rarer scenario, The Gunfighter Wannabe challenges someone who he thinks is The Gunslinger but isn't. So the Wannabe ends up killing some Cowboy or City Slicker, and is promptly branded an Outlaw — but discovers that he lacks the cojones for banditry. This version of the storyline usually ends with the other bandits killing or abandoning him. Occasionally this results in a Heel–Face Turn, but since Redemption Equals Death, it usually doesn't end well.

Other variations include the Wannabe being a hanger-on in an Outlaw band, only to learn that this isn't what he wants — usually when his supposed True Companions abandon him (with a broken leg or something), and then the hero rescues him.

For similar characters outside the Western genre, consult the general Heroic Wannabe page. Note that this character usually does not wanna bee.