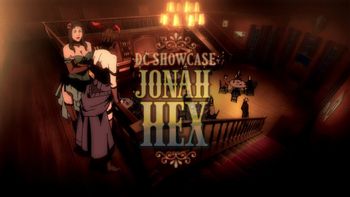 DC Showcase: Jonah Hex is a 2010 short animated film, directed by Joaquim Dos Santos and written by noted Western comics writer Joe R. Lansdale, featuring Thomas Jane as disfigured bounty hunter Jonah Hex on the trail of a ruthless brothel madame who has murdered his latest quarry. The film, which was released on July 27, 2010 as a bonus feature on the Batman: Under the Red Hood DVD, was the second of the DC Showcase series and was included on the compilation DVD DC Showcase Original Shorts Collection in an extended version.