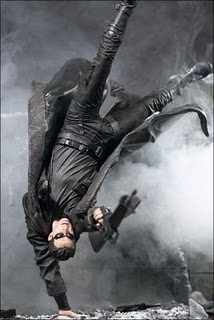 Essentially, the main point of Gun Fu is the liberal application of Rule of Cool to firearms. Expect lots of Guns Akimbo, Pistol-Whipping, and a heat-packing version of the Offhand Backhand. While pistols are the most common weapon, it can also be done with anything else you could reasonably consider a firearm - Uzis, the Sawn-Off Shotgun, even rocket launchers, as long as you hold it in your hands and fire it. Occasionally, they mix in a little standard martial arts.

It's become very common in modern action movies. Why? Rule of Cool, that's why!

John Woo pretty much invented it in 1986 with A Better Tomorrow, which launched the Heroic Bloodshed genre in Hong Kong. Shortly afterwards, these sequences began popping up everywhere. Chow Yun-Fat, who became an iconic image with a gun in each hand, starred in most of Woo's later films.

Now it must be clear that this is not Gun Kata, though it is a close relative. That trope is more about strategic dodging and aiming with guns, while this is about acrobatics with guns. Both are graceful and cool to an almost obscene degree, but Gun Fu is, funnily enough, probably the more plausible of the two. Although both involve Improbable Aiming Skills. And yes, you can use both at the same time.