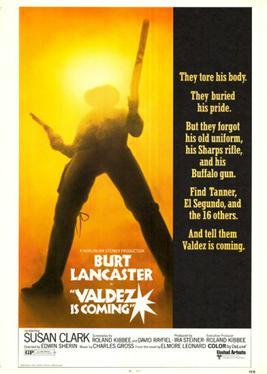 Valdez is Coming is a 1971 American Western film directed by Edwin Sherin and starring Burt Lancaster, Susan Clark, Richard Jordan and Jon Cypher. The film is based on the Elmore Leonard novel of the same name.

Aging town constable Bob Valdez (Lancaster) is tricked into killing an innocent man by powerful rancher Frank Tanner (Cypher), whose hired gun R.L. Davis (Jordan) shot up the hovel where the wrongly accused man and his Indian wife were trapped. Valdez believes it would be a fair gesture to raise $200 for the widow, $100 from Tanner and the rest from others in town. Tanner is livid at the old man's suggestion. He orders ranch hand El Segundo and his men to tie Valdez to a heavy wooden cross and drive him into the desert. Valdez survives and recovers and summons up his days in the U.S. Cavalry in order to fight them. Valdez wounds one of the henchmen and sends him back to Tanner with the message, "Valdez is coming."